Yann Serra (Le Mag IT): “For IT B2B journalists, physical events are irreplaceable” 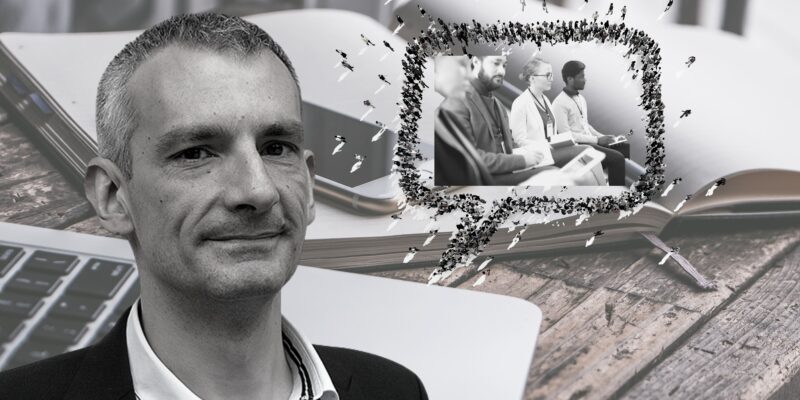 He used to dream about becoming a comic book artist and ended up as a journalist specialising in IT B2B, a job he has been doing for more than 25 years. Yann Serra, journalist for Le Mag IT – and amateur comic book artist – answered our questions about the impact of COVID-19 on the IT press and IT businesses and shared with us his vision of the future of the industry.

Tell us about how you became a journalist…

Since I was a child, I have been a comic book fan and, at the age of 16, I had the brilliant idea to send my illustrations to some representatives of the emerging IT press. Amstrad 100% magazine started publishing them when I was in high school, before offering me to join their editing team. I became a freelancer and specialised in IT- and video games-related topics,  before I was hired on a permanent contract by Posse Press, as editor-in-chief for several magazines (Editor’s note: PC Team, Login:, Palmtops) and this job paved the way towards IT B2B press. Afterwards, I worked as a senior reporter for 01Informatique until 2013, which allowed me to do field research, then as a journalist specialising in infrastructure, storage, and networks for Le Mag IT until today, while freelancing for other IT media.

How did you reconcile your passion for comic books with your work as a journalist?

As a child, I was greatly influenced by Spirou et Fantasio (Editor’s note: French comics). In high school, I was known as “the artist” and then, it stuck. After a number of deceptions trying to get my art published, I turned to journalism, while still pursuing my passion as my strips were published by PC team and later by 01 Informatique. The latter was the magazine for which I created the Bobineau character, a CIO who had a series of adventures and whom I kept using for institutional communication projects in brochures and newsletters – to communicate on GDPR, for example. Paradoxically, these projects allowed me to have more earnings as an illustrator than as a freelance journalist; in a manner, it was a revenge on my aborted career as Franquin’s successor (Editor’s note: comic book artist, author of Spirou et Fantasio)!

As a journalist, how did the COVID-19 pandemic impact your daily life?

As a strong advocate and practitioner of remote working for several years, the lockdown and crisis did not change my working habits and I kept on writing articles every day at my usual rate. However, regarding the other aspect of my job, which consists in reporting on conferences and meetings abroad, which occurs a week every month on average, sadly, everything stopped abruptly! These business trips are very exciting, offer access to rich content, and stimulate creativeness, because they allow for a complete immersion during several days into a topic, putting me directly in contact with the vision of the business holding the event, its products, and its customers – and jetlag acts as an additional layer. Since the crisis hit, I have had to settle for with virtual events and conferences on Zoom, which offer a good alternative, but they definitely do not equate the experience and leeway I get by asking questions in order to get original info. This is very frustrating and made me lose the interest and pleasure I took in field research. Now, my job consists merely in popularising information and embellishing press releases.

Did IT companies manage the crisis well from a business and communication standpoint?

When it comes to the rate of announcements and use cases, COVID-19 does not seem to have altered the situation for European businesses, which seem to fare rather well, probably because of a generalised policy in favour of remote working, which caused businesses to invest more in renewing IT infrastructure.

Regarding communication, the many virtual events I was invited that replaced the actual events originally planned unfortunately did not convince me or bring as much added value. For the IT B2B press, the more detailed and technical the pieces, the more readers and usefulness they have, for readers invest in solutions worth several hundreds of thousands of euros and therefore, they need accurate information to make their selection. To write such articles, I need as much data as possible and only actual physical presence allows me to get original, interesting, and consistent information for my publications.

What are your predictions for the future of the IT B2B industry in the next few years?

Contrary to general belief, the industry does not evolve suddenly and disruptively. Changes happen slowly and businesses tend to take a long time before adopting them, for fear of adverse consequences. For example, I do not think this is the end of data centres – they will merely transform. However, I predict Intel will disappear in the next two years. I also think storage has become the most complex area of infrastructure: after going from NAS to SAN, from physical storage to cloud-based and object storage, vendors are now building hybrid solutions. The number of journalists who still follow this industry closely decreases every day, since it is hard to stay focused and understand everything. Finally, there are still many pending interrogations about the post-COVID economic recovery: sadly, I think we should expect some IT vendors which specialise in industries that were hit hard by the crisis – such as tourism and culture – to be strongly impacted.