A European guide to press releases 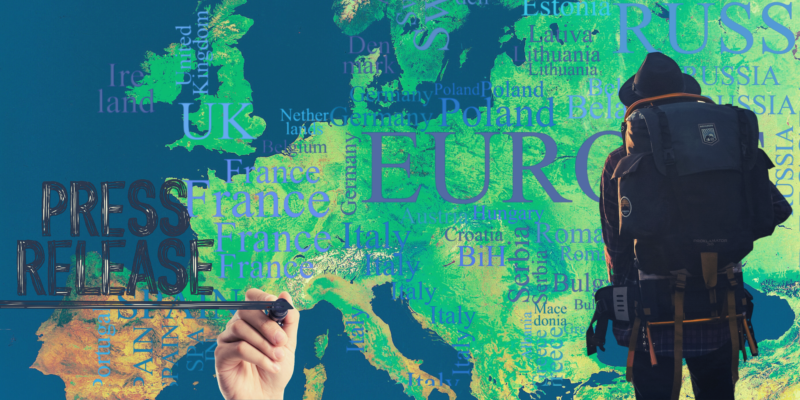 A few weeks ago, the international network Enterie interviewed our managing director Edouard Fleuriau-Chateau to know more about best practices in terms of press releases on the French market. His comments were included in a very interesting blogpost entitled “How to write an international press release ?” This piece details which content you should focus on to write a press release. You learn how to structure it, the cultural differences that exist between countries and what you should localise or not. Since Enterie gave us permission to reuse this content, we  chose to summarise their article with a focus on cultural differences in Europe.

The basics of creating a press release are similar everywhere, but there are subtle regional differences. What is newsworthy may also differ depending on the international environment.

Even small details – like whether a photo should be included – depend on the location. The most easily found standard on the Internet is an American-British press release, so we will focus on other regions. Keep in mind that differences go both ways. According to Bob Spoerl, President of Bear Icebox Communications: “European companies must adopt a targeted approach when working within the U.S. media landscape.” Conversely, American companies cannot use everything they learned in the US.

Releases should only be sent when a company has something new to announce that is interesting or different, such as a new product and service launch or a partnership. Only current topics make the news. As Vitis PR writes on its blogpost about sending press releases in the UK: “Businesses and consumers are used to receiving the latest updates. We – as the communicators – should meet their needs.”

When you have content ready to be published, targeting journalists is a crucial step: “For example, at the BBC, it would not be advisable to send your release about a new home security camera launch to every journalist there. Instead, check the BBC website or your media databases to see if any of the journalists have written about home security technologies or similar products, and then send the news to those journalists first”, says Ranbir Sahota, Director of Vitis PR.

The UK is one of the best places to send a press release. Broadly speaking and compared to other European countries, British media are really open to press releases. Even though not every one of them is published by journalists, this is a well-received form of communication. Companies (or its PR agencies) are keeping them updated via press releases.

It is always best to send a press release as a plain text file via email: “Press releases should always be copied into the body of an email in a plain text format – not added as an attachment. Including links in an email/press release directing interested readers to an external website for further information or images is a good idea, rather than adding those as attachments”, explains Ranbir Sahota from Vitis PR.

German journalists generally demand reliable studies and data. Language and tone are more matter-of-fact and objective than American press releases. Format, however, is very close to the one used in the US. Infographics or pictures should be either attached or sent as links, as the main press release is sent via email (text).

While most markets are usually interested in a new product or a business partnership, it is definitely not the case in Germany. “Product launches and partnership news do not work in Germany. Media are also not very interested in information about new features unless it is relevant to the entire industry”, says Tatjana Ramerth, Head PR at ELEMENT C, a German agency.

French press releases tend to be much shorter than American ones. “We usually try to be more straight-to-the-point, take out the overselling points and keep only one quote. Journalists’ busy schedules will thank you if you keep your press releases short and sweet”, explains Paris-based Edouard Fleuriau-Chateau, Managing Director at the OneChocolate, a PR & Digital Marketing agency.

France is (stereotypically) very concerned about its language and culture. And it has an impact on you – as a foreign brand – and the way you should communicate. Take care of the contents you release and pay great attention to the grammar used. Poorly translated, these could do more harm than good. “Journalists will always judge the form before diving into the content. So if there are any grammatical errors in the press releases or in the pitch, it may be an immediate deal-breaker”, informs our source.

The keywords for any press release in the Benelux region are ‘news’ and ‘relevance’. A new or improved product or service, or acquisitions and mergers can be good topics for a press release.

Research and surveys are also good candidates, but a local component – respondents from the Benelux region – is a key to success. A global or EMEA scope usually does not cut it. Arnout Lansberg, a consultant at the Amsterdam-based MCS PR considers that “Market analyst’s recognitions, media awards, ‘momentum’ releases (‘We’re doing really good, see?’) and ‘customer buys product/service’ is something we advise against putting out a press release for.”

The Netherlands’ press release format is similar to the US, with one or more quotes (preferably from Dutch spokespeople), a boilerplate, and contact details. A communication specialist’s job is to make journalists’ lives easier – this applies everywhere. According to a Dutch expert: “A good photo or illustration is very helpful, as it gives the journalist more than just text, making his job easier”.

In Belgium, a photo may even be a must-have.  “A picture can do miracles and it is essential to generate coverage. No pic, no article”, says Rafaël Tirmarche, from Factivity. In Belgium and Luxembourg, the so-called mass distribution of your release (to the database of all relevant media, e.g. tech media) will not miraculously impact your visibility.  “These are used for only around 20% of all pitches”, says Tirmarche.

Exclusive pitching (offering the story to one specific medium) is used 80% of the time and works much better. “We pitch a lot as we tailor our press relations as much as possible”, explains Tirmarche.

This is not news: Scandinavia requires Scandinavian-centric press releases. To be more precise, they should always be Swedish-, Danish- or Norwegian-centered. Although neither is a huge country, they have a very fragmented media industry, so best practice tends to weigh on the side of targetting a single tier-1 medium at the time. For Scandinavian journalists, it is crucial to get “their own story”. Later on, after it’s published, you can pursue the topic with further pitches and follow-ups.

It is important to keep in mind that Scandinavia is not a single country. While there are many cultural similarities between the Danish, the Norwegian and the Swedish, their language, communicational habits, and especially the media landscape vary a lot between countries. This is why it is vital to partner with PR agencies that specialise in national markets. “You can  have a single point of contact and general leader for PR projects, but it is crucial to have one regional specialist in each of these markets”, says Magdalena Górak, founder of Enterie, the European PR & marketing agency network.

Compared to Scandinavia, there are even more nuances and disparities in Central and Eastern Europe. Countries such as Poland, Hungary, Romania or Estonia have literally nothing in common when it comes to language or media outlets. Press releases have to be translated into the local language and somehow connected with the local markets – unless we are talking about the larger global brands, that are always of interest everywhere.

When approaching journalists with a press release, similarities are less important than what differentiates the countries. In Hungary, a catchy title/headline is important, while in Poland, presenting as many numbers and reliable data is key, and as there is a very small media landscape in the Baltic states, you should usually approach one or two journalists at the most, rather than preparing a huge news release dispatch.

“Press release is only one of dozens of PR tools we use nowadays. It used to be the main one for several years, but it is not anymore”, says Zuzanna Szybisty from Polish agency Profeina.

So, as you probably gathered, preparing a press release – especially an international one – might be a tricky task.  In some European countries, things are even more complicated because of internal linguistic discrepancy.

In Switzerland communication comes in four languages and four different styles. Some press releases might need to be broadcast in all four of them and sent to different media outlets.

In Belgium, press releases always need to be written in both Dutch and French.

In Ukraine, which has a huge Russian-speaking community, it is appropriate to address press releases or statements only in Ukrainian, as it is the only official language. However, some of the PR agencies may need to send two versions (in Ukrainian and Russian) to the journalists.