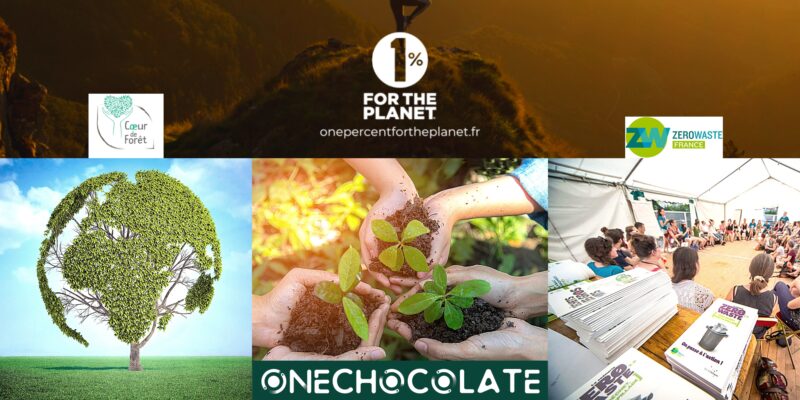 In 2020, OneChocolate decided to join “1% for the Planet”, a global movement led by businesses that chose to donate 1% of their annual revenue to associations dedicated to protecting the environment. A year later, we are happy to introduce the organisations we chose to support – Cœur de Forêt and Zero Waste France.

Since its creation in 2005, far from limiting its activities to reforestation initiatives, Cœur de Forêt endeavours to restore woodlands in France and all over the world, in order to preserve the biodiversity of local ecosystems,. While combatting deforestation, it implements projects with local producers to support them in setting up agroecological systems and raises awareness about the preservation and use of natural resources.

We were thrilled to learn that 500 trees will be replanted in Madagascar because of our donation. In 2020, to combat the depletion of local forests caused by slash-and-burn agriculture, the loss of biodiversity and the intense soil erosion in Antsirabe, Cœur de Forêt replanted 150,000 trees of 16 different species to restore and preserve biodiversity using a sustainable forest management approach. The association also trained 30 teachers to raise awareness among 3,000 children regarding deforestation-related issues.

In addition, through its experimentation and training platform, Cœur de Forêt trained 10 local producers to implement agroecological agriculture on 5 ha of land. The platform is designed to support and empower local farmers in agroforest systems to allow them to work the land autonomously. Last year, nearly 350 kg of essential oils were commercialised, and a local product line was created to profit small farmers, using equitable and transparent commercial exchange channels.

Zero Waste France – for a world without waste

Founded in 1997, the independent citizen movement Zero Waste France raises awareness and takes specific actions to address all members of the public. Its main missions – to analyse and explain the challenges of waste management, to inform private citizens and other members of society on the solutions and means that can be implemented, to engage public bodies and political leaders into changing regulations, to implement specific actions on the local and regional level, and to support field activists.

At OneChocolate, we are deeply aware of waste-related issues and what its reduction on a global scale entails, which reflects in our personal as well as professional lives. As the draft legislation “Climate and resilience” is being debated by the French Parliament, the need to support independent citizen associations like Zero Waste France is even more critical.

We are proud of our individual and collective commitment towards protecting the environment as well as natural and human ecosystems. Through these donations, we support the actions of those who work in the field. The initiatives we selected match our vision of a more “eco-logical” world, which would be better suited to the current and future challenges to preserve our planet.